Understanding the fundamental mechanisms leading to metastatic cancer has been hampered by the need for models that both replicate the in vivo situation (but are amenable to tight control) and facilitate high-resolution, time-lapse imaging and quantitative analysis of cell behavior.

Over the past several years, the PS-OP investigators have developed microfluidic systems that are capable of simulating many steps of metastasis, including tumor cell invasion, intravasation, trapping in the microcirculation or adhesion to the vessel walls, and extravasation into surrounding extracellular matrix. This prior work has shed new light on the interactions between a transmigrating tumor cell and the endothelium, the role of specific adhesion molecules, and the deformations of the cell and especially the cell nucleus, experience during the transmigration process.

The current PS-OP is employing these assays in combination with new measurement methods to interrogate the changes in cell mechanics during the process of extravasation. These approaches are also being used to understand the nature of the cell-cell and cell-matrix force interactions.

The PS-OP researchers are also investigating the nuclear deformations, changes in chromatin structure and the resulting changes in the transcriptome, which could have important implications for the subsequent ability of extravasated cells to form a new tumor.

In close coordination with these experiments, computational models are being developed to simulate tumor cell/endothelial cell interactions, nuclear deformation, and the resulting changes in gene expression.

These PS-OP studies will provide new insights and enhance our ability to identify and screen for new therapies to inhibit the tendency for metastatic spread of disease. 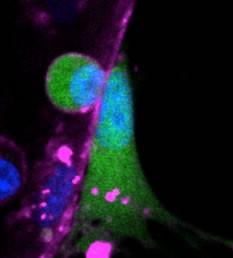 Kamm’s research group applies fundamental concepts in fluid and solid mechanics to better understand essential biological and physiological phenomena. His lab focuses on the molecular mechanisms of cellular force transmission and sensation, and the development of new microfluidic technologies for vascularized engineered tissues and models of metastatic cancer. He is co-founder of two companies, CardioVascular Technologies, and AIM Biotech, and is currently the Director of the NSF Science and Technology Center on Emergent Behaviors of Integrated Cellular Systems.

Dr. Giuliano Scarcelli is a physicist specialized in optical science and technology development. He obtained his Ph.D. in quantum optics from UMBC under Prof. Yanhua Shih. Before joining the University of Maryland, Giuliano was at the Wellman Center for Photomedicine of Harvard Medical School for eight years, first as a postdoc in Prof. Yun's Lab, then as an instructor and assistant professor. He maintains a visiting faculty position at Harvard Medical School.

Dr. Giuliano's articles have been cited over 1000 times and he is inventor of five patents. Giuliano has been the recipient of several awards such as the EU outgoing Ph.D. fellowship, the Harvard-Tosteson Postdoctoral Fellowship, the Human Frontier Science Program Young Investigator Award, the NIH Quantitative Career Award.

Dr. Vivek Shenoy is Professor in the Departments of Materials Science and Engineering, Mechanical Engineering and Applied Mechanics, and Bioengineering at the University of Pennsylvania. Shenoy's current research focuses on developing theoretical concepts and numerical methods to understand the basic principles that control the behavior of both engineering and biological systems.

A significant challenge in modeling the engineering and biological systems we study is that important processes involve coupling of both small-scale (atomic or single molecule) phenomena and long-range (elastic, electromagnetic) interactions over length scales of hundreds of nanometers. The goal of his group's work is to address these issues by combining atomic scale simulation methods with continuum or mesoscale theories and by adapting insights from condensed matter physics, solid mechanics, chemistry, materials science and applied mathematics. Shenoy has been honored as a Rosenbaum Fellow at the Isaac Newton Institute of Mathematical Sciences, University of Cambridge (1999), a National Science Foundation CAREER Award (2000), and was the Richard and Edna Salomon Assistant Professor at Brown University prior to moving to the University of Pennsylvania.

During the last few years one of the areas of major concentration in the Szleifer lab was the study of the role of macromolecular crowding in the structural and functional properties of biological systems. His work includes the modeling of chromatin under crowding conditions and prediction of gene expression under different nanoarchitectural changes of cell nuclei. The modeling work of Szleifer has been done in close collaboration with leaders in the field of cancer biophotonics, Dr. Vadim Backman (Northwestern University). Szleifer is a fellow of the American Institute for Medical and Biological Engineering (AIMBE), American Association for the Advancement of Science (AAAS), and a member of the Lurie Comprehensive Cancer Center at Northwestern University.

Dr. Peter So is a professor in the Department of Mechanical and Biological Engineering in the Massachusetts Institute of Technology. Prior to joining MIT, he obtained his Ph.D. from Princeton University in 1992 and subsequently worked as a postdoctoral associate in the Laboratory for Fluorescence Dynamics in the University of Illinois in Urban-Champaign.

His research focuses on developing high resolution and high information content microscopic imaging instruments. These instruments are applied in biomedical studies such as the non-invasive optical biopsy of cancer, the mechanotransduction processes in cardiovascular diseases, and the effects of neuronal remodeling on memory plasticity. Peter So is currently the Director of the MIT Laser Biomedical Research Center, a NIH NIBIB P41 research resource.